Ultraviolet radiation (UVR) can cause long-lasting damage to our bodies, like aging and skin cancer, but is it an equal-opportunity damager? How can we promote cell repair after UVR damage occurs? Hong Wang is a physicist in the Center for Human Health and the Environment (CHHE), and was part of a research team that set out to answer these questions through ground-breaking research, partially funded by CHHE.

If UVR damage goes unrepaired it can cause our DNA to mutate and prevent it from properly doing its job of keeping us alive and well. DNA is organized into chromosomes, and at the end of each chromosome is a highly-specialized area called a telomere, which Wang compares to the protective plastic at the end of our shoelaces. Without telomeres, cells may have premature aging and/or uncontrolled growth (aka cancer).

This research team wanted to know how UVR specifically affects telomeres, and how they repair themselves. Before this, other researchers on this topic had gotten unclear results, but Wang’s group created a research method designed specifically for the study of telomeres that would reduce the confusion from the previous studies.

By using technology known as “immunospot blotting,” Wang and her team were able to see that telomeres are also damaged by UVR, but when they were exposed to both UVR and certain proteins in the laboratory, damage was reduced and cell repair increased. Plus, repair happened at a much faster rate at the telomeres than along the rest of the chromosome (i.e. the plastic shoelace ends repair themselves faster than the rest of the lace).

Why is this so important? It means that our cells can repair UVR damage at these incredibly fragile and specialized regions known as telomeres, and this is the first time that it’s ever been conclusively documented.  If we can promote rapid cell repair in the laboratory, maybe we can do it in real life as well.

So, does this mean we don’t need to worry about putting on sunscreen? No! Even though this study shows that our telomeres can fight back against UVR damage under the right conditions, some damage cannot be repaired- so wear your sunscreen! Unlike many other health impacts, the problems caused by UVR can be avoided relatively easily. “People can make the choice to protect themselves or not, and it can have a huge impact on their long-term health.” 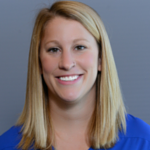 Katy May is the Project Coordinator for CHHE’s Community Outreach and Engagement Core. She has a background in community-based management of environmental issues, with a focus on urban and coastal communities. When she’s not outreaching and engaging, Katy is a volleyball coach, beach-goer, and crazy dog mom.